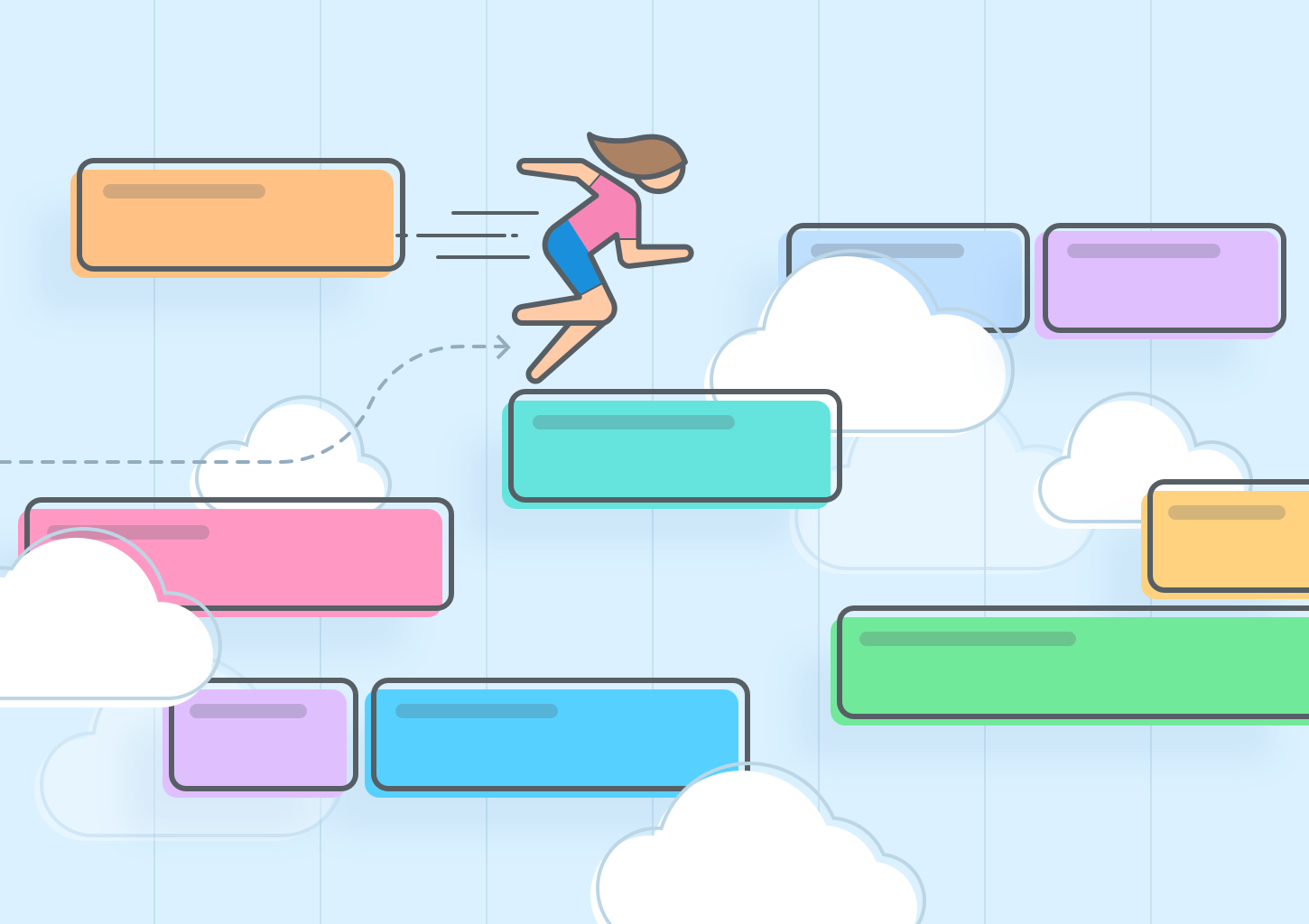 The Gantt chart was created in the early 1900s and one of its first major uses was helping the United States prepare for World War I. The massive mobilization of soldiers, equipment, food, fuel, etc. across the Atlantic Ocean required an incredible amount of planning!

Although the charts were pretty basic back then, they're actually not all that different from the ones project managers use today. Given how much technology as a whole has evolved over that time, it’s quite remarkable that a project management method developed over 100 years ago has remained so relevant.

Like most tools, Gantt charts have pros, cons, and general limitations. In this piece, we're going to explore how Gantt charts are used to plan projects, some benefits of using a modern-day Gantt chart, and how you can use a Gantt chart software tool to help organize your team.

The basics of a Gantt chart

In its simplest form, a Gantt chart is a bar chart that breaks down projects into timelines, tasks, and delivery dates.

The left-hand side of the charts displays a list of tasks, the top shows the calendar, and the middle is where the duration of each task is visualized in bar or line form. Plot all that on a spreadsheet, and you've got yourself a basic Gantt chart.

On paper, Gantt charts give you a visualization of:

However, as the Kendis Team points out, while Gantt charts have come a long way since they were made by hand with strips of paper placed on a board to show progress and milestones, they've still got a long way to go. "Using excel sheets also added some simplicity to creating Gantt charts, but there is still a void as it does not completely cater to dealing with the drudgery of making the charts," they note.

In fact, while Gantt charts are a practical way to organize your team's timelines and milestones, they can't give you an overview of your team's resources, capacity, or task management on their own. That's where a modern-day Gantt chart software tool can be a big help.

Most project managers would agree that, despite their best efforts, projects rarely go completely as planned. While even the simplest Gantt charts allow teams to make adjustments to project plans once they kickoff, using a Gantt chart software offers even more flexibility when it comes to making changes on the fly.

Suppose a project is delayed because a team member is out sick, or the client requests a change and the goalposts need to be moved for a milestone. In those cases, Gantt chart software can make it easy to shift the entire project's deliverables based on your needs at the time.

In fact, Float lets you move the entire project timeline with a couple of clicks. Just open the project view of the schedule, click shift timeline, and update the start and end dates.

If you need to move everybody's tasks down their calendar by a couple of days to make room for a more urgent project, you can do that too!

Milestones not only give your team something to aim for, but they also keep them on track to finish their assigned tasks on time. You can plot milestones on a Gantt chart so your team can see critical steps in a project like essential meetings and product launches.

Notice the diamonds on this Gantt chart?

They are project milestones, and they let your team know when they've reached a major goal, and allow them to swiftly switch gears to the next phase of the project.

In Float, milestones are displayed as dots at the top of the schedule that can be hovered over to reveal their details, and also as horizontal bars when you're in the project view.

Not only do visualizations give your team a clear expectation of what they need to get done, they can also see what the rest of the team is working on. Take a look at this example Gantt chart created in Excel.

Each task within the project is given a clear start and end date. The team can see that the tasks are set up so one needs to be completed before the next can start (e.g., task 1 and task 2 of phase 1).

This is where Gantt charts can be especially helpful.

If your team is doing a website redesign, you can't create a project scope until the research into the project is complete. Plotting out tasks onto a Gantt chart and setting clear start/end dates for tasks ensures that everyone is working from the same script.

Gantt charts cover a lot of ground when organizing projects—but they don’t cover everything.

Crucial features like capacity and reporting are left out. In fact, Capterra’s 2019 Project Management User Research Report found that Gantt charts are actually the most ignored project management software feature by teams who have access to them.

Teams are increasingly looking for features like task management, reporting, and collaboration to organize their workforce and keep track of projects as they are being worked on.

Using a combination of spreadsheet columns, stacked bar charts, and formulas, you can build a Gantt chart from scratch in Excel.

While creating your own Gantt chart has some advantages (e.g., it's free and easy to customize with different colors and fonts), there are several disadvantages.

If you want your team to see the chart during a project, you'll have to grant them access control. Not only does this mean your team can change things up, but it can also throw all your hard work out the window if somebody accidentally moves a deliverable date or deletes a task from the timeline!

Excel also doesn't integrate with a lot of project management tools used by team leaders. If you are looking for a tool that automatically updates when a team member finishes a task or a milestone is hit, Excel may not be the right tool for you.

Google Sheets does come with a couple of Gantt chart templates, so you don't have to do all the heavy lifting yourself.  Start/end dates, timelines, and tasks are already preloaded, which makes planning your project on the chart easier.

However, many of the same problems that plague Excel are also present in Google Sheets. Neither one is very user friendly as teams grow and their needs become more complex.

Like many agencies,  MetaLab began by organizing their team and projects using spreadsheets.

Operations Manager Georgia McGillivray says that when Metalab's team was smaller and had a single person managing resources, spreadsheets worked. But when their team grew, spreadsheets became unsustainable."We needed a less manual process, better reporting, and the ability to plug in tentative projects in order to look forward at the upcoming months," she says.

So they made the jump from spreadsheets to Float. The increased visibility has not only boosted the team's accountability and productivity, but they're no longer wasting countless hours each week manually updating spreadsheets. It's also easier to organize their team members who work remotely (a third of their workforce). If they're in a different country, a time zone and location tag is added to their profiles, so when tasks are assigned, the operations team can factor in the time difference.

"Our ops team has to know what 100+ different people are doing at any given time, and Float compiles all of that information for us in one place, so we can see a cross-section of the entire company in an instant."

Float is the perfect tool to take tried-and-tested tools like Gantt charts and merge them with the features that today’s project managers really want—specifically, easy task management, robust reporting, and greater collaboration. With Float’s capacity management feature, team leaders can schedule individual work hours and account for holidays and time off to get an accurate picture of their team’s true capacity.

As Float CEO Glenn Rogers points out, when Henry Gantt produced "Man Record Charts" to track team-based capacity utilization, they were never the only planning tool in his toolkit. “A Gantt chart that doesn't account for capacity is a chart with only the best intentions,” he says.

Float makes it easy to create accurate schedules and timelines for every project in your pipeline. You can schedule tasks, create milestones, track budgets, and deliver projects on time, every time.

“It must be clear when your team is free to take on new work, what projects are competing for their attention, and when they have planned time off. These are all factors that influence their capacity and your ability to deliver a new project.”

The good news is that if you’re already using a Gantt chart in one of the spreadsheet options above, you can easily import your data into Float using the import feature. Then, you can organize team members based on their capacity and skill set, create new projects and assign tasks, and see exactly who is working on what and when!

Gantt charts have been used for over 100 years—from organizing armies to plotting accurate project timelines. There's no doubting they're usefulness.

Without the right Gannt chart software, though, they can be a pain to maintain and lack many features that modern-day teams are looking for. Float takes the best parts of a Gantt chart and merges them with features like capacity management, project tracking, flexible integrations, and more so that teams can work smarter and faster.

Looking for a better way to organize your team?  Float is trusted by 3,000+ of the world's best teams. Try it free for 30 days.

By Kimberlee Meier
In a previous life I was an award-winning Australian journalist. Now I live in Edinburgh and write research content for select B2B/SaaS companies. My workshop is located below.
https://www.kimberleemeier.com
Other articles you might like
Project Planning

The Top 7 Management Tools for Agencies in 2020

Your agency's workflow is critical to productivity. The right tools can help your agency team to deliver their best work. Here's how.
Project Planning

An Introduction to Remote Project Management

Time Blocking 101: How It Can Boost Your Team’s Productivity

Your team’s productivity relies on optimizing their time. Time blocking is the smartest way to schedule your time to get more done.
Float © 2021. All rights reserved.