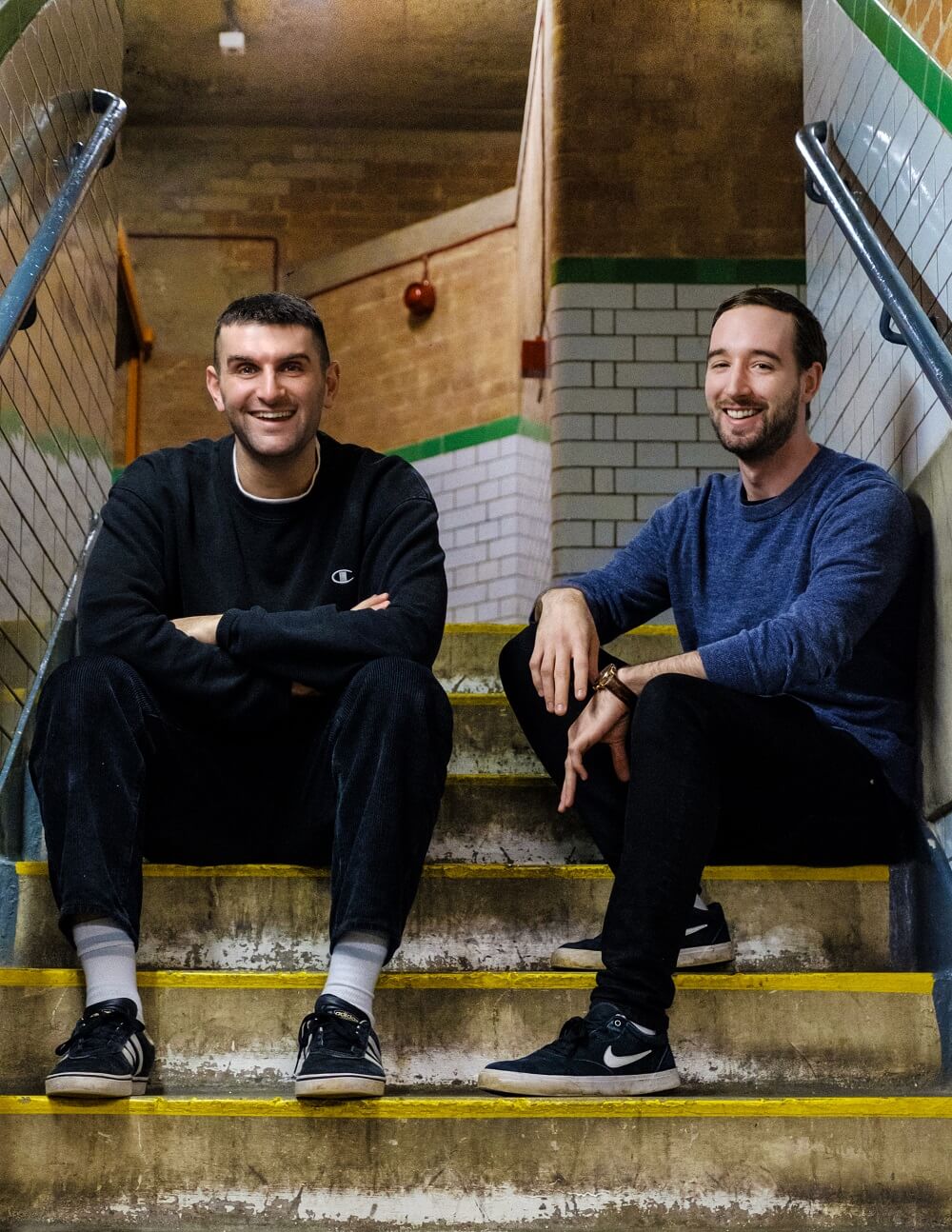 Can you describe Berry Cinema in one sentence?

What’s the story behind your name?

To be completely honest, Berry Cinema just sounded nice to us. It totally got stuck in our heads, and after designing some mockup Berry logos and assets, there was no getting rid of it!

Baring in mind, we came up with the name at about the age of 14 for our YouTube channel, as we needed a platform to host our skateboarding videos and early action films.

It makes us so proud that, 12 years later, Berry Cinema is actually growing its name throughout the creative industry. You don’t really expect that to happen when you’re filming chase scenes (barely in HD at the time) out of the back of your mate’s car on a DSLR.

How large is your team now?

We’ve grown, not massively, but enough to keep us on our toes and to realize that it’s not just the two of us anymore!

We’re very fortunate to have a handpicked team of creatives that cover all aspects of video and content production. “SAS” is the best way to describe them, as they really are at the top of their game when it comes to filmmaking—passionately grafting and exploring every route possible. We have a great mix of great people, ranging in both age and opinions, who provide a wide array of experience and skill.

We’re always on the lookout for talented individuals and teams who want to push boundaries.

Did you have any mentors when you were first getting started? How did they help or inspire you early on?

We’ve always been inspired by our family, friends, bosses, and colleagues who have guided us through the hardest stages of our careers. Our parents (bless them) have been so supportive of our filmmaking ventures growing up, despite the stress we’ve put them through!

There are so many ridiculous stories. We used to break into dangerous derelict buildings to film post-apocalyptic battle scenes and invest all of our cash into fake weapons and military-grade attire. We once even had the armed police called to our family homes for using fake guns. We wouldn’t even be exaggerating to say there were ten police officers at the Burnham household, drinking tea, waiting for the Berry boys to return home from a hard day shooting. “Where’s your armorer, lads?”

You make mistakes along the way, but you’ve got to learn from them too. Help comes in heavy from the inspirational people around you.

What does a typical project look like for you?

There’s so much variety with what we do, and it really keeps the team fresh and passionate. We’re very lucky in the sense that we find all of our projects exciting, and we think our creatives and concepts reflect this.

We always look at projects from the outside, and it seems to be the reason we can continue creating original, entertaining, and engaging content without struggling for ideas.

When you find yourself showing a mate down at the pub a cool project you’ve just worked on, then you know something has gone right.

How has mobile technology and social media impacted the way that you create?

Future technology impacts every creative thought process now—especially for us.

Due to our wide range of ages and experiences, everyone at Berry has equal say in techy conversations. There’s no right or wrong when it comes to using new technology; it just has to be right for the content and the client.

At one point a few years ago, it seemed as if all of our clients were “future tech” companies. It was a perfect opportunity to not only learn loads around autonomy, electricity, and racing but also to incorporate our own creative technology to complement these brands (including using new camera technology like 360º, 3D, and VR).

We are continually pushing to be at the forefront of new tech—sometimes just for our own personal use—which eventually translates over to client-based projects.

What makes a project stand out in your eyes?

Our USP would definitely be our clever use of using visual effects and motion graphics within our film work (what we like to call “digital eye-candy”). Cinematography is our passion, and boosting these beautiful visuals and giving them identity is the cherry on the cake.

We’ve always been keen to portray a message or story through just visuals, if possible. We like to imagine that even if the sound were cut out, our work would still stand out solely through exciting onscreen motion graphics, gorgeous visuals, and highly imaginative aesthetics

One challenge running your own shop can be that you’re paid to create and build things for other people, at the expense of your own ideas. Do you work on any internal projects? How do you balance the two?

Balancing the two is so tough! When the year gets busy with client work, it takes time and experience to know when the personal projects can come back into the mix.

Since we started, we’ve always been passionate about short films, sketches, and (trying) to win awards. We’ve had our fair share of pulling in celebrity talent onto these self-funded films too! We even managed to convince Ronaldo (the real Ronaldo…not Cristiano!) to be a part of a Berry short once.

It is at the point now where our client work does feel like personal work.

We get so into the creative aspect that it feels like our little baby, and when that happens, you completely forget that it’s being created for a brand or client (which we think is a good thing)!

Can you tell us a little bit about the comedy sketch platform you recently started?

In 2019, we launched our own comedy sketch platform called Sketchie.
What started as us just wanting to create fun, high-quality dark comedy sketches, ended up turning into a full-on brand.

It’s such a refreshing, colorful brand and a great way to release those weird creative ideas in visual form. Sketchie has brought us back into the world of complicated filmmaking, and we love it. The Berry team have been setting stuntmen on fire, incorporating special effects, pushing ourselves with visual effects, and using new tech to achieve complicated narratives! It’s going well.

On top of that, we’ve also been hosting comedy stand up nights for charity, which was a serious challenge at first (none of us had ever worked in event management before), but it’s gone down a lot better than expected. We’ve hosted two nights so far with some amazing comedians, including Lee Nelson, Lou Sanders, Cardinal Burns, Tom Ward, Felicity Ward, and loads of others!

A few years ago, it seemed like 3D was all the rage in both film and technology. What’s the status of 3D as a medium?

3D is a seriously powerful tool and has never left as far as we’re concerned! Given that a good number of our clients are in “future” industries, creating exciting and inspiring 3D films is a necessity.

We’re always integrating 3D elements within our projects, and, when used correctly, it seriously ups the quality and value of the work that we can produce. Not only do we know how to use 3D, but more importantly, we know when and where to use it.

Incorporating 3D graphics into a project doesn’t necessarily make it more professional looking or better, and we know that. That’s a common mistake some filmmakers make as they force-feed 3D assets into their projects just for the sake of it, without thinking about whether it’s well suited for the piece.

We know how to use 3D to compliment our projects rather than carry them (from lots and lots of trial and error).

Are there any other technology trends that you’re excited to use in your work?

Being proper, cool ’90s kids, we grew up at the perfect time for video-gaming and computing. So naturally, we’ve always been interested in the latest advancements in technology and what new gadgets and software are coming out.

We know people like to bang on a lot about virtual reality, but we’ve always been significantly more interested in the development of augmented reality.

It’s one thing to fabricate an entire digital world from scratch, but to be able to blend it seamlessly with our reality in real time takes things to a whole new level!

We’re keen to see where this technology is heading, as it’s very similar to what we do in the post-production stages of our projects with visual effects.

What advice would you give to someone who is considering starting their own production company or creative agency?

We haven’t done everything right, and we’re definitely not the most experienced people to talk to when it comes to starting up something like this—but we’ve given it our all and lived to tell about it. We can say for certain that things do get easier.

It’s one of those things that works best when you surround yourself with like-minded people. Find a crew that gives 110% and keep them by your side.

Check out all the cool stuff the Berry Cinema team is working on at berrycinema.co.uk
More interviews
United Kingdom
Brand
Media Production

"We’re not interested in being brought in to ask the same questions and deliver the same answers, or to work with brands that want to maintain the status quo."
Float © 2023. All rights reserved.