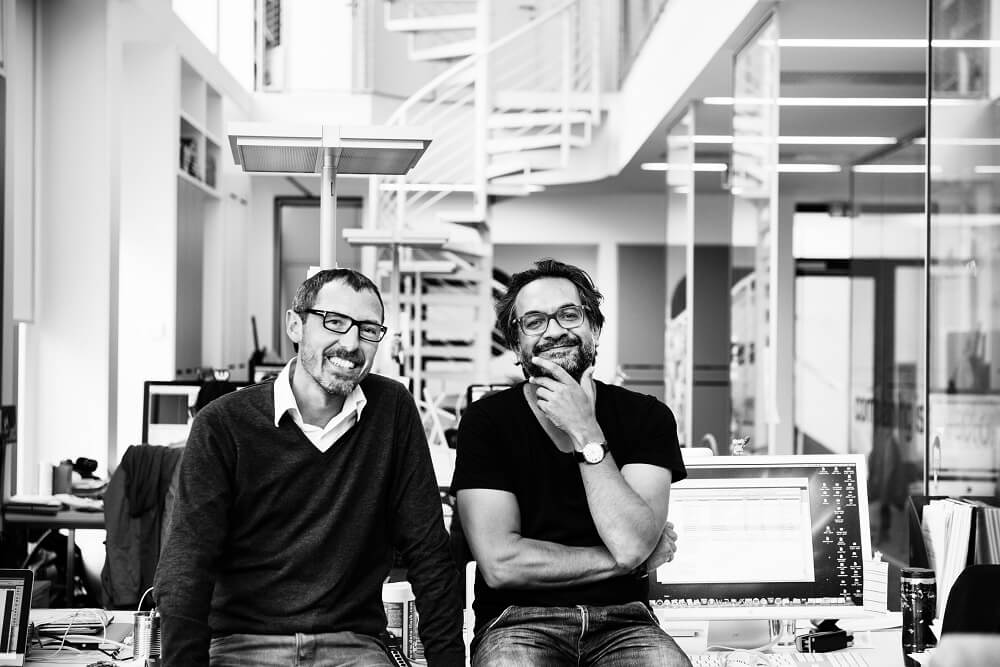 In one sentence can you tell us about moodley?

Moodley is a multidisciplinary agency in the areas of brand identity, interactive design, and product design.

What made you decide to launch your own agency?

We were young and needed the money! I was working at another agency at the time, which unfortunately went bankrupt. Gernot worked in the automotive industry and was also the founder of an outdoor furniture brand, so he was a customer when we met.

In the beginning, I took care of the creative matters and Gernot took care of the economic areas. The learning curve was very steep on both sides. There were (and still are) shared areas of responsibility, but in the end, we’re both comfortable doing what needs to be done.

What’s the story behind your name?

It’s the maiden name of my mother. We thought that the name sounded cooler and more international than Fuisz & Leonhartsberger (our last names). Honestly, it wasn’t until later that we noticed that the word “mood” was in moodley.

You’re based in Vienna, Austria. What’s it like living and working there? What’s something people might find interesting about the area?

In recent years, Vienna has been ranked as the number one city in the world in terms of the highest quality of life. The distinction is based on a combination of traits such as stability, rising living standards, and advanced city infrastructures. Apart from that, there’s music, coffee, wine, theater—you can have a really good time here.

What were some early challenges you faced when you launched?

The biggest problem we had was having no money and no customers. Our first office was only 20 square meters! Many people were of the opinion that it was impossible to build an internationally respected design agency based out of Graz.

To be honest, nothing would have come of this without the Swedes—specifically our work on the H&M suit and the armchairs of IKEA. In retrospect, everything looks very simple, but there were many highs and lows to deal with along the way.

Did you have any mentors when you were starting out?

In 1999, the agency scene in Graz was a bit shallow. The big role models were all based elsewhere—in Hamburg, Munich, London, New York, Zurich, Madrid, Tokyo, etc.

Unfortunately, a real life mentor was one thing that we lacked. But at least a bank manager believed in us!

We were also fortunate enough to have had a few friends who connected us to potential clients.

What does a typical project look like at moodley?

First, we make sure that the common strategic goal is defined. More visibility? More sharpness? Tell a different story? Is it a repositioning project? What is the problem? Who are the future customers?

We have a well-staffed brand consultant team in-house, so almost every project starts with a brand personality workshop and an intensive customer insight phase. We want to make our customers successful, and that means being able to understand them and their market well.

Without a strategic core, there can be no design. Ideally, designers and brand consultants are involved in every phase of the project. The customer is also involved in the entire design process, so they know exactly what’s getting presented to them at the end. The process is more complex than others, but also more satisfying for both sides.

Have you ever turned down a project because it was a poor fit?

Yes, we have, but it was a long and painful journey to learn that it’s okay to do so.

We are a yes agency at heart, and yes agencies have a hard time learning to say no.

With many young designers and engineers being swept up in the startup culture, how do you attract the right talent to come and work with you? Do you shoot for generalists or specialists?

A successful agency needs both. High diversity in all areas is a declared goal of moodley. Of course, in some areas, it is difficult to get the right people. A-class people typically want to work with other A-class people, so you have to be careful about that.

Creating the right conditions for the team to do a good job is also a challenge. Rather than setting up wellness zones in the offices, we believe in paying the team well and offering a lot of flexibility in their schedules.

Is there a different vibe when your client is an established brand versus when you’re working with a startup?

Both customer types come with the same goal in mind—to be successful. The most important question we have for them is, “Do you want to make a difference in the world out there?” If the answer is yes, then we are on board.

In general, startups can be a bit more difficult to work with as they are notoriously underfinanced and extremely dreamy. Which startups you give your time and effort to must be well considered.

If you could start your agency over, what’s something you would you do differently?

We made many mistakes along the way, and some we even made twice! We could have learned faster from our mistakes, and we could have grown faster as a result.

​You’ve been around for nearly 20 years now. What’s been the biggest change in terms of how your clients are interacting with their customers?

The average customer is much more experienced and educated in the areas of branding, design, and positioning—which is great! The importance of these areas in terms of succeeding in certain industries cannot be overlooked today.

Can you tell us about a cool project that you’re working on or that you’ve recently finished?

Oh, that is difficult as we are working on many exciting projects! For example, we’re currently working with a small, fine fashion label in Detroit called Detroit is the New Black (DITNB). Another exciting project is called femSense, which is a revolutionary new technology that helps women calculate the optimal time to get pregnant.

​Are there any technology trends that you’re particularly excited about?

Artificial intelligence will surely be an exciting technology for our industry, but honestly, I hope its development will take a little more time.

At the moment we are experimenting with data-driven design feedback systems. We are approaching these technologies slowly and without hysterics.

How do you know that you’re on the right track as an agency?

​What advice would you give to someone who is considering starting their own creative agency?

See your work as a craft. Don’t settle for anything less than excellence.

Be fearless. Go for it.

And give no energy to critics!

Check out all the cool work the moodley team is doing at moodley.at/en
More interviews
United Kingdom
Brand
Media Production

"We’re not interested in being brought in to ask the same questions and deliver the same answers, or to work with brands that want to maintain the status quo."
Float © 2022. All rights reserved.